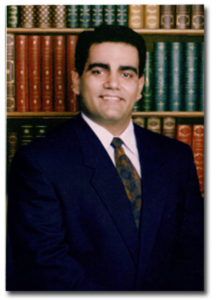 Most of his patients simply call him Dr. Mehran. Some patients have even started calling him Dr. Magic because they say his methods work so well it is almost like magic.

Dr. Mehran Soudbakhsh operates a family clinic treating all musculoskeletal disorders of the spine. He also specializes in whiplash and other accident related injuries.

Dr. Mehran has been a Chiropractic Physician since 1997. He grew up in western New York state and attended the University of Buffalo, graduating with a Bachelor of Science in Industrial Engineering in 1993. He always had a keen interest in health sciences. While he was finishing his engineering studies, he was introduced to chiropractic and was intrigued by its potentials.

His zest for learning, along with his interest in chiropractic compelled him to seek a chiropractic degree. He was accepted to Palmer College of Chiropractic in Davenport, Iowa and started chiropractic school in October 1993. While he was at Palmer College he was an elected class officer and was president of several college clubs. He was also recognized by Palmer College for his services in radiology, physical exam and clinic departments.

During his studies at Palmer College, while visiting family in southwest, Dr. Mehran fell in love with the southwest culture. Upon graduation from Palmer College in 1997, Dr. Mehran decided to move to Las Vegas to focus on his career as a chiropractic physician. After working for other clinics for the first two years of his career, Dr. Mehran opened his clinic, North West Chiropractic Clinic, in July 1999, in the Centennial Hills area of Las Vegas. Since opening his clinic Dr. Mehran has accumulated a strong following of patients who appreciate his extremely high success rate of alleviating pain and suffering and his warm and caring bedside manner. As Dr. Mehran says, “A doctor needs to do much more than examine his patients, he needs to listen to them”. His ability to listen with a caring ear is, in part, what has made Dr. Mehran one of the most successful Chiropractors in Las Vegas.

If you have any questions about our Las Vegas chiropractor, or would like to learn more about chiropractic care at N.W. Chiropractic, please call us at (702) 658-1681 today!

Font Resize
Contrast
Accessibility by WAH
Call Us Text Us